DELTA:  FOR WARKA ACCOUNT HOLDERS VERY GOOD NEWS THIS LETTER WAS FROM CBI AND SIGN BY ALAQ STATING THAT WARKA BANK IS BACK ALSO A COPY WAS SENT TO ISX!!!

According to the decision of the Board of Directors of this bank No. (7171) for the year
2019, we would like to inform you that Warka Bank for Investment and Finance
has resumed its activities and provided banking services such as issuing
letters of guarantee and letters of credit for the purpose of working with the

bank through these activities and accepting letters of guarantee issued by it.

MonetAmour:  Wow! This bank has 120 branches in Iraq IMO those trucks have been very busy
stocking them. 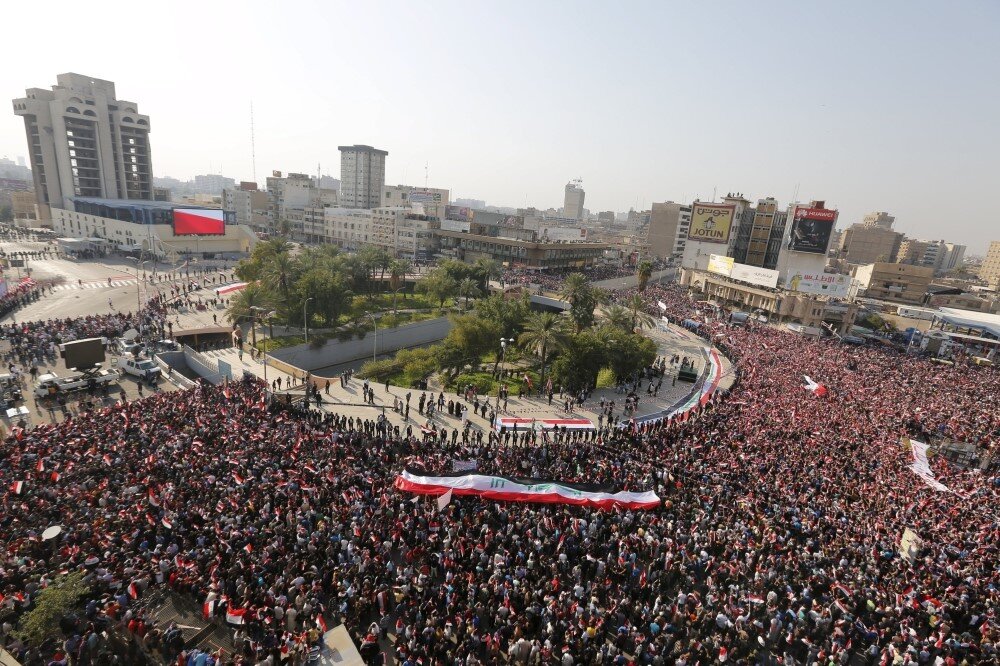 Scollie:  If you look on the left side of the photo just outside where the citizens are, it looks like to me their is a Truck with Large Electronic Billboard on it.   Would be nice to start showing some Visual Aids on there!!!

Don961:  Video” .. Liberation women clean the streets and decorate the sidewalks with flowers

The roads leading to the square also saw voluntary activities such as decorating the sidewalks with flowers.

MilitiaMan:  When they clean up the mess they’ll be able to get back to business!! I am seriously liking what this is showing us today. These women know what to expect from the CBI and with those bill boards in the square in an article today that someone kindly pointed out, I could see the descriptions and depictions of what is to come be out for all to see once the place is tidied up!! What a way to get things back to normal and ready for a new beginning with a new sovereign currency and even a new government for to mange the citizens demands going forward!  Let’s see what the next “Couple” days brings. Imo – All good! – MM

Poprye7:  I agree MM, and the time to act is now… The momentum of these protests must be acted upon by the CBI while the people of Iraq are fervent in their desire for change… The more time is wasted, the more this could either fizzle out, or explode into such a disaster that it would take years to put it back together again… IMO a fine line…

Jay:  Iranian influence. Iraq & Lebanon the reason for our pause?

The following is IMO only. (Outside the scope of the protests, obviously)

We all know Iran is the reason this  has not happened yet. Doodles & I hypothesized that Iran needed to be made to comply or had to be dealt with harshly back in November 2017 and it was just our opinions. We spoke of this in team chat and made a few posts about it.

So fast forward to now. Last week and the week before we saw articles stating that Lebanon banks were closed and what turned out to be, for 2 weeks. <—- In that time the 2nd round of protests kicked off. We entered a pause and a much needed revolution to oust Iran from Iraq and its financial system(s). Iran CANNOT profit from this RI.

So I’m sitting here shopping for a twin turbo set-up for my big wheel and I am thinking about Lebanon. I never knew until just a few days ago that Iran has its meat hooks in Lebanon. I/we read just a few days ago that Lebanon banks were reopened and fully operational for their peeps. They led us to believe that their up rise is what contributed or fully caused the Lebanon banks to close and it was probably part of it, but NEVER LET A CHRISIS go to waste.

I had a thought today. Just about 30m prior to this post. I thought. hmmmm I wonder if the UST has sanctions on Lebanese banking? Well whatia-ya know they DO. Imposed in August & September of this year….

Turns out there is around 26 of these branches and they ALLL help fund Hezbollah. Keeping in mind Doodles & I thoughts from 2017. “IRAN HAS TO BE MADE TO COMPLY or be DEALT with”. Trump being the genius that he is started “CHOKING OFF” Iran in Iraq. That took time and pressure. Sanctions needed to be imposed at “SPECIFIC” intervals for the choking to take affect. Almost a year later, Iran is hurting big time in their country, financially. But not in Iraq. The (cash) auctions, black mkt oil sales, ports  and corrupt officials are supporting Iran just fine. We need a final nail. A final blow to the Iranian money machines.

This “FINAL” blow will make Iran COMPLY. <—- no choice, really.

Well here’s the good news. It already happened. We are on the end game side of this “OPINION” of mine. Keep in mind the Lebanon banks reopened a few days ago. Meaning the UST sanctions did what the FAB 4 wanted them to do. So the UST allowed Lebanon to reopen their banking institutions.

WOW. this is really quite brilliant of Trump/UST if I am even close to being right. lolol So its all about timing. We all know that. Trump timed it all to this point. Now we see the CBI Gov put forward and hopefully will be confirmed soon. <—- WHY??? Because its now TIME FOR HIM TO BE ANNOUNCED. (<–cbi gov). Hence why I said we are at the end game side of this opinion.

All Honor & Glory to God. This is about over.

Special thanks to WS, Frank & Teams. If it were not for their teachings in this investment, the ideas we all have would not be possible. Thank you guys & gals.

The Secretary-General of the League of Arab States, Ahmed Aboul Gheit, declared that the Arab region is the most suffering in the world from water shortage, noting that 80% of the Arab water sources are outside the Arab world.

Aboul Gheit said in a speech on Sunday at the opening of the third week of sustainable development: “Countries in the Arab Mashreq (Syria and Iraq in particular) suffer from Turkish domination over water resources. Palestinians suffer from systematic looting by the occupation for years. Groundwater in the Occupied Territories .. Finally, Egypt is facing a serious threat to its share of the Nile water because of the Renaissance Dam project, which Ethiopia is building on the Blue Nile .. Note that Egypt, which has a population of more than 100 million, has already entered the stage of water poverty for years.

The third edition of the Arab Week for Sustainable Development was inaugurated in Cairo on Sunday under the chairmanship of Dr. Hala Al-Said, Minister of Planning, Follow-up and Administrative Reform in Egypt.     LINK

Cleitus:  The weaponizing of water resources.  You will see much more of this in the future!

NanaCarol:  There was a farmer who grew excellent quality corn. Every year he won the award for the best grown corn.
One year a newspaper reporter interviewed him and learned something interesting about how he grew it. The reporter discovered that the farmer shared his seed corn with his neighbors. “How can you afford to share your best seed corn with your neighbors when they are entering corn in competition with yours each year?” the reporter asked.

So is with our lives… Those who want to live meaningfully and well must help enrich the lives of others, for the value of a life is measured by the lives it touches. And those who choose to be happy must help others find happiness, for the welfare of each is bound up with the welfare of all…
Anonymous