Don961: Report: Corona crisis is the last straw in the coffin of the political system in Iraq

The Wall Street Journal said the Coruna Storm could be the last straw in the coffin of the political system in Iraq, with the government failing to contain diminishing oil revenues, deteriorating services, and disrupting public life.

The newspaper stated that the Iraqi state institutions are already collapsing due to the drop in oil prices, the collapse of health infrastructure and the state of geopolitical chaos in light of the exchange of threats between Washington and Tehran, attributing this to the rampant corruption that dominated the political system in 2003. 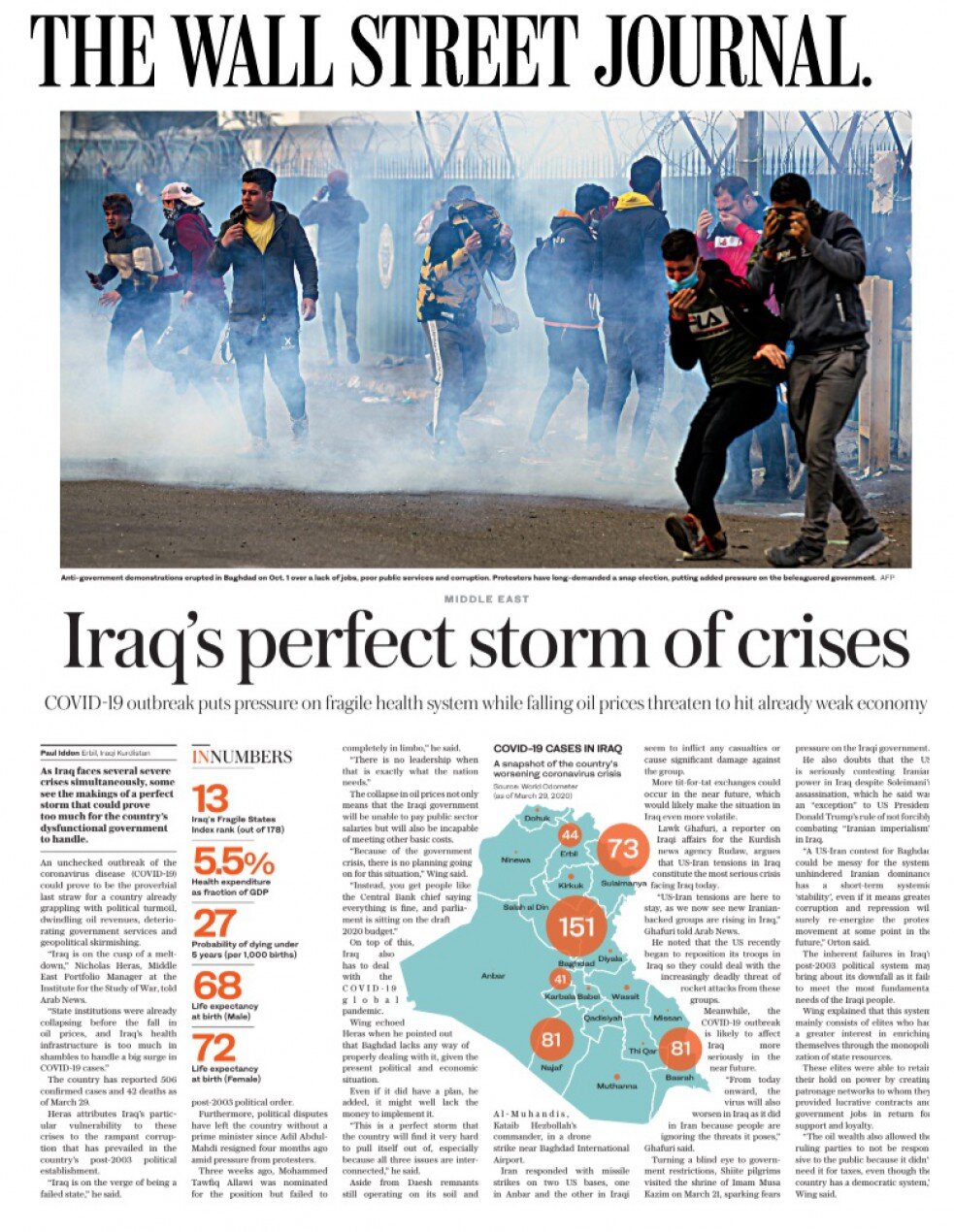 The Wall Street Journal added that Iraq at this time The embarrassment needs a stable political leadership, but political differences and ignoring the demands of the demonstrators have brought the country to the point of collapse and Iranian-backed groups have become more aggressive in threatening US interests, prompting Washington to reposition its forces so that they can deal with the attack. The missile is more convenient

The newspaper concluded by emphasizing that the current moment in Iraq is the greatest opportunity ever to get rid of the political system, which since 2003 has been concerned with monopolizing state resources and enriching patronage networks at the expense of the Iraqi people.   LINK

Billuke:  Amen – Iraq has been an embarrassment.

Cornhusker: Hear is what i have heard ….the IRS is no more …all IRS employees  are moving in to the US treasury building …they will be doing the paperwork on the consumption tax …no money here the US treasury that has the money is in Reno, NV.  ….all the above is hear- say imo…..Judy Shelton will be at the US treasury.

ImGolfer:  Ok the nice guy I am I pulled a the world map. Gave my wife a dart and said throw this dart and wherever it lands I’m taking you for a 2 week holiday when this pandemic is over.

Turns out we’re spending two weeks behind the fridge!

Clare:  FANTASTIC CC TONIGHT! LOADED WITH GREAT INFORMATION ..THANKS SO MUCH FRANK, WALKINGSTICK, DELTA, AG & TEAMS!  IRAQ REALLY IS PAINTED INTO A CORNER… LIKE YOU SAID… IT’S GREAT!

StrongCBM:  One thing about holding ones breath….at a particular time your body “forces” you the breath so it doesn’t die…

The payment system is the basis for the economy of any country, because it is at the center of economic activities and in general, the payment tools reflect the way in which the individual can pay for the goods and services he gets

The payment system has witnessed many developments starting with the barter system, which means exchanging a commodity in exchange for another.

There was no other way to exchange, and this system was accompanied by many difficulties, which led to the creation of another method, which is commodity money, then legal paper money, and with the development of economic life more and more led to the emergence of Another innovation, which is checks, and with the era of globalization, the revolution in information technology, and the emergence of the Internet, has led to the creation of more sophisticated means, which are electronic means, and it is defined as a group of tools and methods that rely on electronic technology to transfer money, which facilitates the exchange process. In a fast and safe manner and at the lowest possible cost in the conduct of exchanges, electronic payment tools are the most controversial today, so most of the central banks in Arab countries have replaced them with traditional tools

And in Iraq, in particular, is still the most dangerous thing facing the Iraqi economy is the frequent use of liquid cash, so the proliferation of electronic tools will certainly have positive effects on the Iraqi economy.

Therefore, the Central Bank of Iraq has taken several steps to develop payment tools and has been distinguished by launching several projects aimed at reducing the use of traditional tools (money), including the project of localizing the salaries of state employees as well as the spread of card services of all kinds (credit or credit card, debit or city card, prepaid card ), As well as the proliferation of mobile phone service and electronic wallets

Many economists have expected the disappearance of paper money from circulation after the emergence of the wave of modern tools, as electronic tools have become a threat to the existence of paper money, but the reality is that money has remained the main dominant in circulation, as we still use liquid money in most of our daily dealings, as is the case in small shops and refiners. Hair, taxi driver, etc. We do not accept others as a method of payment, as it represents a safe and reliable method, but in reality it is not the ideal solution

There are a group of reasons that may be the main reasons for the non-proliferation of electronic payment tools:

2- There is no banking culture and awareness in society

3- The difficulty of individuals accepting these modern tools and considering them as a final alternative to the traditional means. Therefore, Iraq cannot easily dispose of the money

It can be said that there is an opportunity to limit monetary dealing today through the emerging virus (Corona) and what is confirmed by this is made clear by the World Health Organization that dealing with banknotes is one of the main reasons for the transmission of this virus and other experts stressed that the exchange of banknotes is a source for the transmission of all types of bacterial and viral infections Therefore, most of the world’s banks sterilized the banknotes in the automated teller machines (ATMs) to ensure no infection was transmitted, and the World Health Organization advised to switch to contactless cash payment to limit the spread of the virus.

Samson:  The text of the closing statement of the G20 trade ministers’meeting on Corona

The Ministers of Trade and Investment of the Group of Twenty and the hosting countries affirmed that the Corona pandemic is a global challenge that requires coordinated response, in which rows unite and concerted efforts to face this common threat, stressing that the time has come for the international community to work more than ever to double coordination and cooperation to protect life Humanity and laying the foundations for a strong economic recovery and sustainable, balanced and comprehensive growth after this crisis

This came in a statement carried by the Saudi Press Agency “SPA” and seen by “Al-Iqtisad News”, after the hypothetical meeting held by the Trade and Investment Ministers of the Group of Twenty today, with the aim of assessing the impact of the Covid 19 virus pandemic on trade and investment, as follows

“We – the Ministers of Trade and Investment of the Group of 20 and the hosting countries – express our deep sorrow and regret over the devastating humanitarian crisis left by the outbreak of the Corona Virus (Covid 19), and we want to confirm that this pandemic is a global challenge that in turn requires a coordinated global response

Accordingly, after the end of the work of the extraordinary virtual summit on March 26, 2020, the G20 leaders pledged to “unite ranks and join efforts to confront this common threat.” Now is the time for the international community to more than ever redouble coordination and cooperation to protect human life and lay the foundations for a strong economic recovery and sustainable, balanced and comprehensive growth after this crisis

In this context, we want to point out that we have begun to monitor and evaluate the impact of this pandemic on trade, in keeping with our commitment to the task assigned to us by our leaders

We are actively working to ensure the continued flow of medical supplies and equipment, essential agricultural products and other essential goods and services across borders in order to support the health of our citizens. In keeping with our national requirements, we will take the necessary immediate measures to facilitate the movement of trade in basic products

We will also support the availability of medical supplies and pharmaceuticals and will strive to enable access to them at reasonable and fair prices so that they reach those who need them most as quickly as possible, by encouraging additional production by providing targeted incentives and investments consistent with national conditions

We will never fail to combat exploitation and unjustified price increases

We are all concerned about the effects of the Corona Virus (Covid-19) pandemic on fragile developing countries and the least developed countries, especially in Africa and small island states, and we are also concerned about the massive challenges faced by workers and businesses, particularly the most vulnerable groups. Accordingly, we will ensure that our joint response to this pandemic is supportive of micro and small and medium enterprises, with an emphasis on the importance of strengthening international investment

We all agree that the emergency measures designed to counter the pandemic of the Coronavirus (Covid 19) – if necessary – must be targeted, equal, transparent, and temporary, and not impose any unnecessary barriers to trade or disrupt global supply chains and must comply with WTO rules . We intend to implement these measures and at the same time adhere to the principle of international solidarity, especially in light of the emerging needs of other countries in providing emergency supplies and providing humanitarian assistance

In this context, we stress the importance of transparency in the current period and our commitment to continue to notify the World Trade Organization of any trade-related measures or measures that will be taken, which will enable global supply chains to continue to work in light of this crisis while accelerating the next economic recovery process

We will adhere to the individual and collective level as we fight this pandemic and seek to mitigate its effects on trade and investment at the international level by continuing to work together to create a free and fair trade and investment environment free from bias and discrimination and transparent, stable and predictable while keeping our markets open

We will ensure the smooth and continuous operation of the logistics networks that form the backbone of global supply chains. We will also explore ways to keep logistical networks open by air, sea and land shipping, as well as identify possible ways to facilitate the necessary movement of health personnel and businessmen across borders without undermining efforts to reduce the spread of the virus .. and we will continue our work in monitoring and evaluating the resulting impact About this pandemic on trade

In this regard, we invite international organizations to provide in-depth analyzes of the impact of the Corona Virus (Covid-19) pandemic on trade and investment at the international level and on global value chains. We will also continue to work together with these organizations to provide coordinated direction, gather and share best practices to facilitate the flow of essential goods and services

We will meet again if the need arises, and we have mandated the Trade and Investment Working Group of the Group of Twenty to raise these issues about earning and identifying additional proposed measures that would mitigate the effects of the large-scale Corona Virus (Covid-19) while specifying actions to be taken on Long term to support the international trading system and accelerate economic recovery

In this context, we affirm that the Italian Presidency of the Group of Twenty for the next year 2021 is committed to continuing to pay close attention to the international commercial climate during discussions on long-term measures   LINK