Samson: Demonstrators Of Tahrir Square Launch More Than A Thousand Balloons In The Sky Of Baghdad

11th November, 2019
Thousands of demonstrators in Tahrir Square in central Baghdad organized a campaign to launch white balloons in the sky, aimed at conveying a message to the international community and the world.

Through this campaign, the demonstrators tried to convey a message to the international community of the peaceful demonstrations calling for reform and fighting the corrupt. LINK 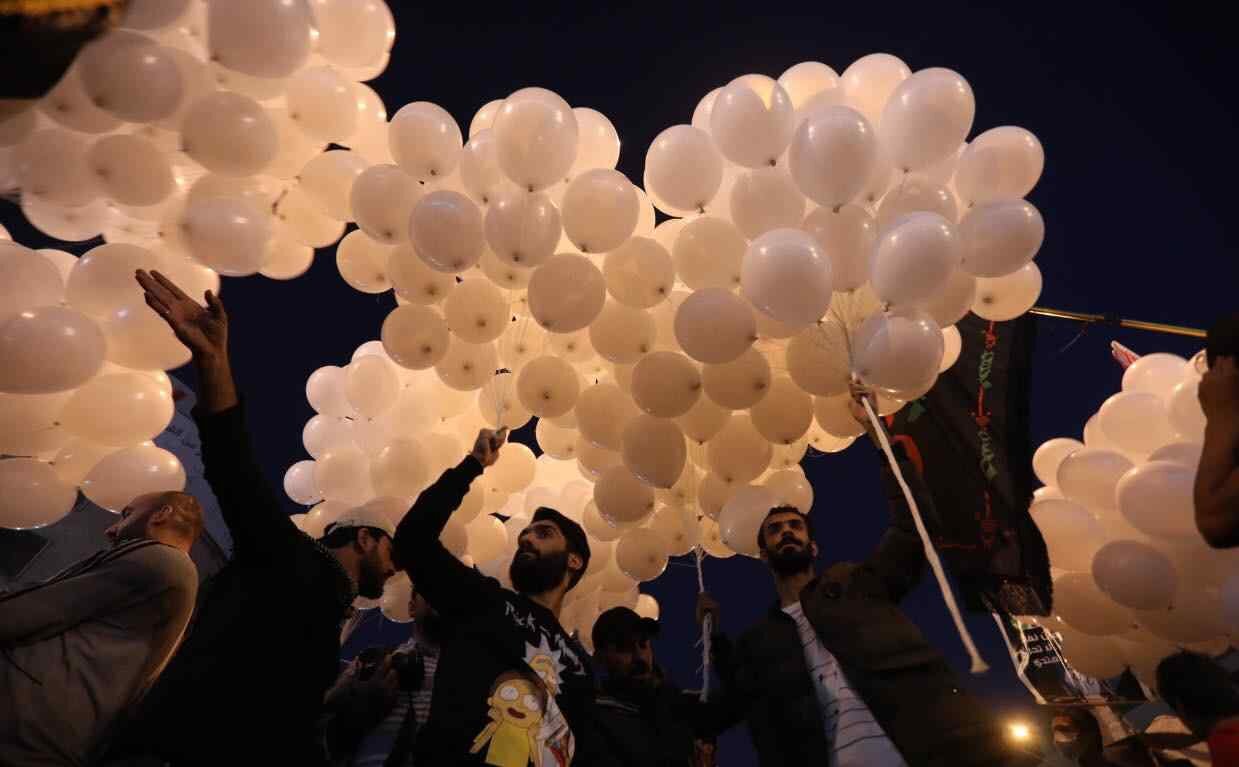 F26: Watch what President Trump does with Iran and Iraq.

Samson:  Khalaf: The Central Bank was subjected to 50 attacks

Spokesman for the Commander-in-Chief of the Armed Forces, Major General Abdul Karim Khalaf, said on Monday that the Central Bank of Iraq has been subjected to 50 attacks in the past days by uncontrolled groups.

Khalaf said during a press conference followed by “information” that “some protesters disrupted traffic in the capital, and assaulted the security men,” noting that “the central bank building alone was attacked by 50 uncontrolled groups diagnosed by security forces.”

He added, “The security forces did not use any force, and the majority of security forces are present in their barracks.” He explained, “All arrests are made only by judicial orders,” noting that “very few of the violent perpetrators of the violations,” saying that “some of them today burned a school and thus will be the target of arrest and prosecution.”    LINK

Samson:  Secretariat of the Council of Ministers: Adding allocations for reform packages to the budget of 2020 without moving the doors

18:19 – 11/11/2019
Announced that the General Secretariat of the Council of Ministers, on Monday, for allocation decisions in addition to budget reform packages in 2020 without transfers between the sections of the budget.

Spokesman for the Secretariat General of the Council of Ministers Haider Majeed told the information that some of the decisions of the reform packages launched by the government need legal legislation and financial allocations, which requires a vote of parliament.

He explained that “the purpose of adding allocations and non-transfer to ensure that it is not objected first and not to affect the other sections of the budget.” LIN

Don961:  Washington: Iraqis will not stand idly by about Iran’s depletion of resources

The United States has called on the Iraqi authorities to hold early elections and electoral reforms, as well as an end to violence against demonstrators that has left hundreds of people dead, according to a report presented on the Saudi channel “Madad News” on YouTube.

The White House said Washington wanted the Iraqi government to stop violence against protesters and fulfill President Barham Salih’s promise to embrace electoral reform and early elections, as the United States is gravely concerned about continued attacks against demonstrators, civilian activists and the media.

The report noted that Washington regretted the restrictions on access to the Internet in Iraq.

The White House said: “The Iraqis will not stand idly by about the depletion of the Iranian regime of their resources, and move armed groups to prevent them from expressing their views peacefully.” link