Tishwash: I haven’t seen this picture in a while

Experts: Iraq buys 90 tons of gold to compensate for what American occupation stole and to boost the value of the dinar

It is no secret to anyone about the ugliness of the American army’s crimes in Iraq during its occupation of Iraq from 2003 until now, where American military bases are spread throughout the country. And another in the central bank coffers.

The American occupation, which was touting as a supporter of democracy and the freedom of peoples, suddenly removed its mask when it saw the treasures of Iraq and became a phrase for gangs specialized in stealing Iraq’s funds, especially hundreds of tons of gold and precious valuables belonging to the ancient civilizations of Iraq, as well as the Jewish archive.

Iraq and the tens of billions of dollars in valuables in the palaces of the tomb of the tyrant went to America, which indicates that when America entered Iraq it brought armies of bandits, war criminals and gangs specialized in theft.

Today, Iraq seeks to compensate for what the United States stole from the Iraqi gold reserves by buying more than 90 tons of gold as a reserve and a cover for the Iraqi dinar in order to enhance its strength in the global markets.

The tons of gold must be accompanied by a clear economic policy that contributes to promoting the growth of the national economy and building and reconstructing what was destroyed by wars and strengthening the financial policy to support other economic sectors, in order to get out of the rentier economy to the open economy.

Economist Saleh Al-Hamashi says in a press statement: Most of the countries of the world maintain balances of gold and foreign currencies to boost their currency and economy, and Iraq was dependent before 1971 on gold as a cover for the national currency and after this date foreign currencies were added as a parallel reserve of gold for the strength of the Iraqi economy, but what happened After 2003, they are organized theft operations by the American army gangs and its mercenaries in cooperation with the intelligence of other countries.

The goal is to steal the treasures of Iraq, foremost of which are gold, precious manuscripts, historical treasures, and others. A, as well as other Anm treasures were looted and Trihlha to America and other countries.

Al-Hamashi added: The gold reserve is an important thing to protect the Iraqi economy from crises and the sanctions that it may face in the future for many reasons.

For his part, economist Jassem Alaiwi says in a press statement: After the invasion of America, Iraq took possession of many thefts, foremost of which was the theft of thousands of tons of military ammunition from the Iraqi army camps and the theft of a nuclear research center that contained 100 tons of uranium, where he transported the contents of this The center is to unknown destinations, as America has established through controlling Iraqi oil fields, where Iraq has the largest oil reserves after Saudi Arabia and its oil reserves range from nearly 200 billion barrels, equivalent to 15% of all global reserves and America’s theft of reserves is estimated 115 billion dollars during one year of occupation, as well as thousands of tons of gold and priceless historical treasures were stolen and transported to America, where some of the relics and treasures were sold in public auctions stolen by officers of the American imbalance from Iraq.

To that, the World Gold Council announced that Iraq bought more than 90 tons of gold during 8 years, indicating that the last purchase of gold from Iraq was in September of 2018 at an amount of 6.5 tons. 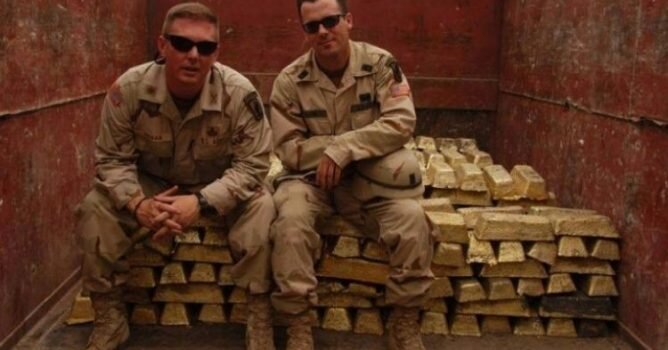 JSL:  Clearly this a is a propaganda mechanism at this particular point and time most likely promoted by an Iranian entity.

They are making bold statements American! American  American!   Also admitting they had Uranium ,Well  Hmmm  Saddam did not have these Nuclear Ambitions

This is to try to turn the public opinion against Americans right now because USA is still helping Iraq to try to get free from Iran.

This is a Broad Accusation.  I bet there is people within our Government that would really like this see all this stuff and where is it.

Remember anytime you’re reading stuff from Iraq, Maliki’s propagation machine is still operating for Iran interest as I see it.

Gullwing:  Maliki owns most of the press and it was him and his cronies that did all of the looting